Members Area: Want To Become A Member? Please click the any of the the options below:

DONATE FOOD BASKET TO THE COMMUNITY

GIVE OUT GIFT TO THE YANKS AT VA HOSPITAL HAMPTON

The SSG. William H. Harrison American Legion Post 190 was founded in the year 1945.

On May 5, 1945, the Post was granted a temporary Charter. On March 11, 1946, the National Commander of the American Legion issued the Post its permanent charter.

The first Commander of the Post 190 was Jeremiah H. Green who served two terms. It was during his term of office that Auxiliary Unit 190 was organized. The first President of Unit 190 was Josephine H. Green.

The Post began holding its meeting in Drew’s Hall, which was located on the corner of Chestnut and South Streets. Shortly after the Carver Homes Project, later Fredrick Military Academy and now the site of the Pines Residential Treatment Center, was built on Gosport Road, now Portsmouth Blvd, to relieve the World War II housing for Negroes. The Post then began holding its meeting in the public clubroom of the Carver Homes Project. In May of 1956, the Post acquired an old residence type structure at 2711 Peach Street, which were enlarged and refurbished, remaining there until August 31, 1973. Regular meeting were held on the 2nd and 3rd Monday of the Month.

On Monday evening, July 13, 1971, Cephas C. Wright, the incoming Commander, in his inaugural remarks emphasized the new administration’s chief goal is to BUILD! BUILD! BUILD!” To spark the action to realize a new Post home in the too distant future, his act was to appoint a building committee with Finance Officer William E. Copeland as chairman.

On August 31, 1973, the Post moved into its new home. The Commander at that time was the late Earl Gardner. The building was dedicated September 2, 1973. The impressive structure, adjacent to the site where the old home formerly stood, is considered one of the most beautiful and practical American Legion Post in the State.

From its beginning and continuing down to the present, Post 190 remains aware of and is conscientiously dedicated to the American Legion’s inculcation of a sense of individual obligation to the Community, State and Nation. 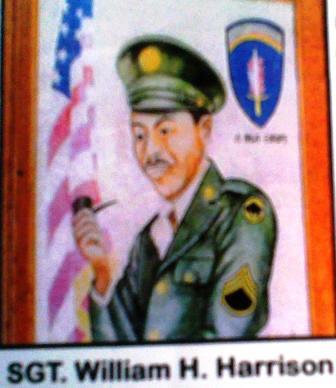 The Post named in honor of Sgt. William Henry Harrison.

Sgt. Harrison, a Portsmouth, Va native, was killed in action while serving as a Machine Gun Sergeant with the 366th Infantry Regiment in Italy during World War II. He was cut down by German machine gun fire in a fierce battle, while his regiment was serving as an attached unit of the 92nd Buffalo Infantry Division at Leghorn, in the vicinity of the Serchio River Valley.  It was December 28, 1944 that Sgt Harrison met his death in the service of his country.

The last Portsmouth native to see Sgt. Harrison alive was the late John Q. Jordan, managing editor of the Norfolk Journal and Guide, then a war correspondent covering the battle in Italy. On Thanksgiving Day 1944, Jordan visited the 366th Infantry Regiment. This was around the time that the outfit was alerted for battle and issued new supplies and weapons. After silently appraising the situation according to Jordan, “well” said Sgt. Harrison, with a grim smile, “I guess this is it…..

Since its founding in 1945, the Post has been, and continues to be, community oriented and dedicated to the assistance of sick and disabled veterans, and is ever mindful of the welfare of orphans and widows. The Post also makes available its meeting hall to other civic and service organization of the community that have no hand of their own. On a case by case basis, the Post responds to request for assistance from individuals and organizations. The Post also sponsors tutoring sessions for students needing the assistance.  Post 190  adopted  three elementary: Victory, Douglas Park and Brighton.

Among contributions and awards from Post 190 have been scholarships to local students attending Norfolk State University, Hampton University, Virginia State University, and James Madison University; American Legion ROTC awards for scholastic excellence to local collegiate ROTC students. The Post has also contributed to the Mayor's Drug Abuse Task Force and over the years, to the United College Fund. The Post is also a life member of the NAACP. On an as need basis, American flags are presented to local school.

From its early beginning and continuing down to the present, Post 190 remains aware of, and is conscientiously dedicated to its American Legion raison d'etre-the inculcation of a sense of individual obligation to the community, state and nation.

FOR GOD AND COUNTRY